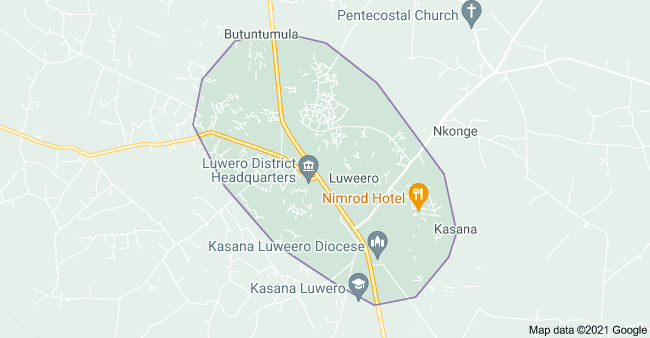 The district lies north of Kampala, between latitude 20 north of the Equator and East between 320 and 330.  The total area of Luwero district is approximately 2577.49 Sq. kilometres.  It is bordered by Mukono and Wakiso Districts in the South, Nakaseke in the West, Nakasongola in the North and in the East is Kayunga District.

The present topography is as a result of a number of ancient denudation processes of the rock systems leaving a series of old erosion level throughout the district.  In terms of altitude most of the district ranges between 1,219 and 1,524 meters above sea level.  The landscape is generally made up of elevated and dissected plateau consisting of a series of flat-topped hills and intervening valleys.

Three quarters of the district is covered with savannah. The soils are generally red sandy loam. The southern part of the district is relatively fertile and can support all kinds of crops. In the northern areas (Kamira and Butuntumula and parts of Kikyusa Sub-counties) some parts developed from sandy loam soils and fertility is low.

In the northern area, there is mainly cassava, sweet potatoes, maize and bananas. In the southern and central, there are bananas, potatoes, cassava, beans, groundnuts, horticulture crops (like tomatoes, cabbages and greens), and upland rice as food crops. Cash crops for the southern and central region are coffee, bananas, and the horticultural crops mainly water melons, passion fruits, tomatoes, cabbages and vegetables whereas pineapple growing is predominant in most parts of northern parts of the district.

For governance purposes, Luwero district is divided into ten sub-counties and three Town councils namely Luwero, Wobulenzi and Bombo.  The district is composed of 91 parishes and 594 villages as indicated in Table 1.1 below.  The district headquarters are in Luwero Town Council, a road distance of about 64 km along the Kampala – Gulu Highway. The District Local Government has two arms namely political which is headed by the District Chairperson and technical headed by Chief Administrative Officer. The major responsibility of the political arm is policy formulation and monitoring of service delivery, whereas the technical arm implements government policies and programmes.